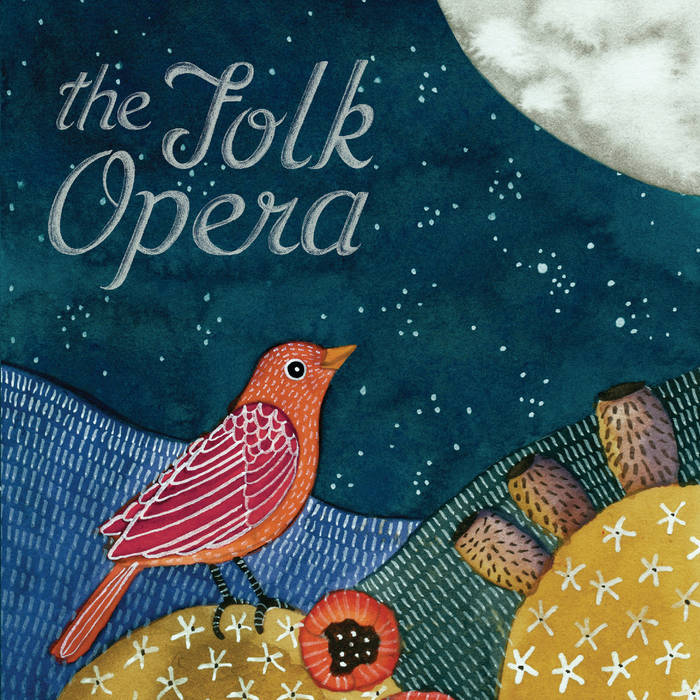 Team Oktopus This album makes our lives better. So so good (EXTRA BONUS: It comes with instructions on how to play the ukelele) Favorite track: What Do We Do Now.

Written and composed on the ukulele during a 6-week trip on two distant continents, recorded live at The Tower Studios in SF’s Mission District, and self-released digitally and on vinyl in December 2010, Annie Bacon’s The Folk Opera is a haunting and triumphant extended musical suite written for ukulele, upright bass, fiddle, trumpet, and multiple voices.

Described by various delighted listeners as a diverse and eclectic cross between A Prairie Home Companion, Neko Case, John Darnielle, Patty Griffin, Thornton Wilder’s “Our Town,” traditional American folk musicals such as “Oklahoma,” and Bob Dylan’s “Pat Garrett & Billy the Kid” Soundtrack, Annie Bacon’s The Folk Opera is, in fact, a musical world unto itself, with few, if any, antecedents in musical history.

In just over a year and fewer than 20 performances, The Folk Opera has achieved a grassroots following so dedicated that the live recording sessions were fully funded by donations from avid fans. Mixed and mastered
by ex-Fantasy Records staff engineer David Luke (who worked with Jefferson Starship, Mike Marshall, and The
Grateful Dead, among others) The Folk Opera translates equally well to recorded media as it has to the live
stage.

The haunting and simple melodies, beautiful soaring harmonies and captivating folk and bluegrass rhythms
are memorable after only one hearing, the characters are so indelibly drawn, you’ll feel like you know them,
and the story – tracing the events of a single afternoon that expand into life-changing moments for a few
different people in a small town – is as timeless as classic literature. Described by reviewers as “transfixing” and “almost indescribably poignant and beautiful,” The Folk Opera is a comedy, a tragedy, and a love story. It will make you smile, and it will likely make you cry. And in the meantime, you’ll want to sing along and maybe get up and dance.

Written and composed on the ukulele during a 6-week trip on two distant continents,recorded live at The Tower Studios in SF’s Mission District, and self-released digitally and on vinyl in December 2010, Annie Bacon’s The Folk Opera is a haunting and triumphant extended musical suite written for ukulele, upright bass, fiddle, trumpet, and multiple voices. ... more

Track Name: What Do We Do Now
[Elizabeth]

So it’s Thursday, in the morning
I called him, he said he’d be here
Said he’d be open, I’m not joking

What do we do now?
We drove for hours to get here

And Aunt Sara’s hard to transport
With her dementia, her weak hips,
And the price of gas which bleeds me dry

Then there’s the Volvo, that’s why we drove here
There’s no one else who knows how to fix it
Unless I drive into New Hampshire

What do we do now?
We drove for hours to get here

I swear I called him, he said he’d be here
Said he’d be open 12 to 5
This shop’s deserted
Track Name: Interlude #1
[Elizabeth + harmony]

Load ‘em up Aunt Sara
Load ‘em up and off to town
We’ve done an awful lot of driving
Now we’ll have to hang around
Track Name: Do You Remember, Aunt Sara?
[Elizabeth + harmony]

The trees formed a tunnel that we would drive through
And on the brightest day, the sun barely touched you

Oh the roads get paved, don’t they?
They say it’s progress, but it passes by the rest of us

Do you remember, Aunt Sara, when Eddie used to live here?
He had 8 or 9 kids and one of them couldn’t hear

Oh the roads get paved, don’t they?
They say it’s progress, but it passes by the rest of us

I think developers are murders, they kill the beauty
We can drive faster now, but I don’t care, I’d rather drive slowly

Do you remember, Aunt Sara, when this was a dirt road?
Do you remember how the maples used to hang low?
Track Name: Watch Your Mouth
[Aunt Sara]

This is not like you
You are not this mean
This is your disease
I won’t let you out
No, no, no, no

[Repeat both verses together]
Track Name: You Forget
[Elizabeth]

It must be hard to forget
Where you are, who you’re with
All the time, all the time

And I’m sorry for the trouble of this little trip
For all that I knew, it was going to be quick

Oh, my
My lady, you’re beautiful

Oh, my
A triumph of agelessness

Who is this man? Do I know you?
Pardon me, but just who are you?
Old man, stay away from me

Oh, my
My lady, you’re clever too

Chatter all you want to chatter
I don’t know you, you don’t matter
Old man, stay away from me

Sara, who are you?
This man’s trying to woo you
I’m sorry sir, dementia
You know how it goes

Oh, my
She’s from heaven, I know it

Oh, my
Sent from God to spare the loneliness

Come inside with me, I pray
A cup of coffee, I’ll pay
Track Name: Rita
[Old Man]

Every day, I come to this café, to drink my coffee
I’m not alone, we come in droves, it’s our second home here

Rita serves everyday but Sunday, and sometimes Tuesday
She’s got a daughter, named after her mother, who serves on Wednesday

Seven years ago, her husband left her for a woman half his age

Then there’s Jocko, who lives a good life, married a good wife
Rita suspects he’s the only man in town who’s happy

Still, no one really knows ‘cause he never speaks a word

Every day, we come to this café, to drink our coffee
To feel less alone, we come in droves, it’s our second home here
Track Name: Superwaitress
[Rita]

Honey, I’ve been here since 5 a.m.
You can’t count the number of varicose veins
Spidery webs creeping up my thighs
Even my shoes have started to apologize

I’ll bring the check right around
Your wallet’s in the lost and found
These walls have seen a thing or two
Babies grow up and work here too
Since when did you take your coffee black?

So I got away
Oh oh oh

And I never thought I would be back
Track Name: Interlude #2
[Elizabeth + harmony]

Time to check on the mechanic
Time to see if he’s decided to show
We can’t spend our whole day here
I’ll go call, and then it’s time to go
Track Name: Lover's Waltz
[Old Man]

Is it too soon to tell you that I love you?
The way your eyes are drenched in wrinkles all around
The aqua net curls that frame your tiny forehead
This lonely winter is starting to thaw

I don’t know you, I can’t place your face
I had a love once with a mouth just like yours
Maybe you are him, maybe, I don’t know
This wild ocean is starting to calm

Is it too soon to tell you that I love you?
We’re getting old now, we might as well say
Grab a hold of life and love while we’re still here
This little fire is starting to burn

When you’re close to the end
It’s better to have a lamp light your way
I’ll be your lamp, I’ll light the dark
And love will carry us home
Track Name: The Argument
[Mechanic]

Yesterday, in a fit of preparation
Thinking of all the things there were to do
I called you, I called you

It isn’t easy to transport an aging woman
Her fragile bones and mind could break at any time
But I called you, I called you

And then today, because of what you said
I drove for hours to get to you
Because you’d be open
You said you’d be open

But when reality called on my behalf
Suddenly, there were we standing in the draft
Of an empty shop, how could this be?
Why did you lie to me?

Now we’re stuck in some Podunk little town
Wasting time and waiting when we ought to be debating
The price of labor, how could this be?
Why did you lie to me?

Is this some kind of joke?
Is your mind so small that you would answer my call
With this worthless drivel, I’m sorry, I’m angry
I don’t understand, we’re coming over now

Please don’t leave
Track Name: Fire's In The Kitchen
[All]

I remember when Charlotte walked up those old stairs
Like a fresh young woman without any cares
But the cancer had eaten, she was almost gone
And a few weeks later, she was

I remember how Eric showed his teeth when he smiled
A redhead with eyes mischievous or beguiled
He was taken too soon, no one knows why
And the trial sent one man to jail

I remember William in our home on Arch Street
With his 26 grandchildren there at his feet
When Carol died, he said, “I’ll be the next”
And a few weeks later, he was

My mind fails me now
Won’t be long, I will join them, I will
Don’t be sad when I’m gone
The heart only has so much room for breaking

I remember when Ian died, it was night
There was a beautiful sunset, my God, what a sight
But the cancer had eaten, he was just 21
And his sister was there when he died

I remember my Hannah with her long honey hair
Smiling and sinking into her chair
But a winter night came
And the ice flipped her car
And her mother, she never recovered

I remember the gentle Benjamin DeFaunt
He was the first son of my late husband’s aunt
He loved me, I loved him
But our love could not be
And in time, he just disappeared

My mind fails me now
Won’t be long, I will join them I will
Don’t be sad when I’m gone
The heart only has so much room for breaking

I remember them all so well

Do you need a phone?

Do you need some tea?

I can drive you home

You want to stay with me?

Is there someone we can call?
You shouldn’t try to talk
Lean against this wall
Here, I’ll help you walk

She was smiling when she passed
That ought to ease your heart
Tragedies, they always come on fast

It wasn’t just your aunt
We lost the old man, too
Benjamin DeFaunt
Of Colusa Avenue

. . . Like a father sings to his child when the thunder breaks
. . . He held her hand, he walked with her the whole way

They were smiling when they went
And that eases our hearts
There’s love in death, it isn’t just the end

Bandcamp Daily  your guide to the world of Bandcamp

Featuring Oakland sounds from the Smart Bomb collective and Samplelov.